Giving: the foundation of the Economy of Communion 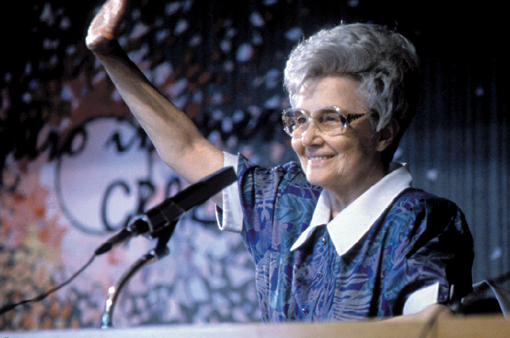 “You know that the idea of the Economy of Communion has awakened latent energies in many of us (from the youngest to the oldest). It has prompted important and demanding decisions and shown ways of making what seemed unbelievable dreams come true.  You also know it has triggered the mechanism of “giving” so that almost everyone, we can say, is committed in offering services, prayers, energy and money; in offering to move, to give land, homes and jewellery.  You know too that seeds of promising business enterprises, aimed at sharing part of their profits with those in need, are already blossoming like a new springtime everywhere.  You know that places in which “new people” will be trained are rising up as if by magic and that the little towns are multiplying.

Now, in order for everything to grow and mature, we must strengthen this virtue of “giving”, so that it becomes a habit for us. The enthusiasm with which the Economy of Communion began has to remain alive within us and grow. We must not disappoint the great hopes and expectations of the needy, as well as the explicit and often enlightened words of encouragement from religious leaders, economists, business people and other experts.

We must keep the Economy of Communion alive in all its aspects, until there is no longer anyone in need among us. Then, there will be a surprising reality that is both human and divine: a whole “body of people” will proclaim God to the world and reveal his presence in history to many, as someone said referring to our project. …

So “giving”. … Let’s give always, giving a smile, understanding, forgiveness or a listening ear; let’s give our intelligence, our will and availability; let’s give our time, talents and ideas (every idea is a responsibility); let’s give our actions, experiences and skills; let’s give our goods which we review periodically so that nothing accumulates and everything circulates.

Giving: let this be the Word that allows us no respite.

We want to live it for the glory of God and to bring back the spirit and practice of the early Christians, who “were of one heart and soul … there was not a needy person among them”. (Acts 4:32-34)”

(Taken from a telephone conference call with the focolare communities in different parts of the world, 23rd April 1992).