Gen Rosso’s Campus Musical is on the way. 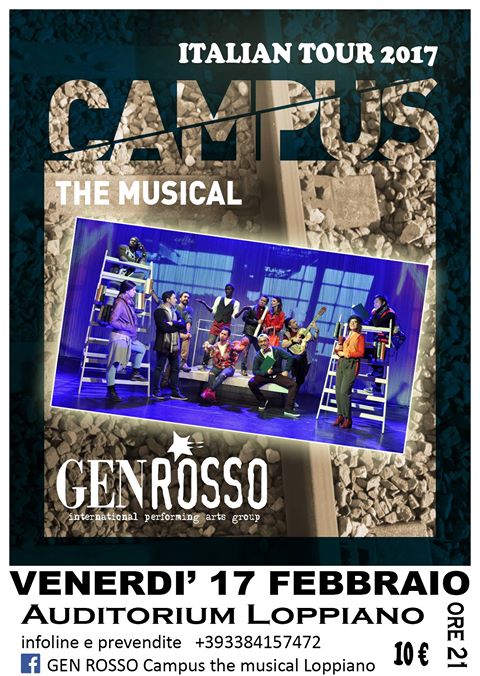 Campus. What does it mean to choose violence as a means for social change? What is happening in the mind of a young person who decides to join a terrorist cell? These are questions that could describe the story of the young people of Campus, who are gripped by the choices and dramas of today’s world: terrorism, hatred, social inequality and the distribution of wealth. The musical will go on stage at the Loppiano Centre Auditorium, February 17, 2017.

Inspired by an original idea of Chiara Lubich, the musical is based on real events, and comes to the stage after 10 years of artistic planning. “It was 2004, just after the terrorist attacks in Madrid,” says Gen Rosso’s manager, Valerio Gentile. “The opening scene is of a railroad track like any railroad track in the world. It’s a story of searching, suffering, questioning and finding redemption, and it places the audience in front of the deep wounds of our times.”

The musical is composed of 23 songs and choreographies that interact with film sequences and theatrical action. “The project is the result of collaboration by a team of international professionals,” musical curator Benedikt Enderle explains. “The sounds are full and strong, with engaging harmonical twists, with lyrics that range from the lightness of a Latin atmosphere to the pathos of African rhythm, in a striking synthesis of sounds that is very captivating.”

The visuals are cutting-edge. “I’ve worked in many international productions,” says Jean Paul Carradori, set designer. “Campus was an unexpected challenge for me because of its dramatic structure and strong theatrical elements. It was necessary to create an atmosphere that would enhance the content and, at the same time, allow the viewers to immerse themselves in the story.”
Directing was by Sarah Finch from Great Britain, development and scenery by Valerio Cipri from Italy, music by Benedikt Enderle from Switzerland and Jose Manuel Garcia from Spain, choreography by Raymond Estrada from Philippines, technical team by Emanuele Gervasoni from Italy, video design, lights by Jean Paul Carradori from Italy, Beligum, arrangements by Emanuele Chirco from Italy, and sound and final production by Max Zenoni.

The “ITALIA per” Project. Every stop on the tour is connected to a cultural event promoted by SUI. Linked with a network of local institutions and associations, the project offers local level reflection and action on global challenges, seeking to remove the causes of hatred among ethnic groups, religions and cultures in our society.