Chiara Lubich: the diocesan phase of the Cause of beatification is closed

The diocesan phase of the Cause of Canonisation and Beatification of Chiara Lubich, founder of the Focolare Movement, ended on Sunday 10th November. Over 500 people filled the Cathedral in Frascati (Rome) where the last session of the diocesan inquiry took place.

Participants included Cardinal Tarcisio Bertone, the President of the Focolare Maria Voce (Emmaus) and the Co-President Jesús Morán, some relatives of Chiara Lubich, two representatives of the Orthodox Church, several mayors of towns in the Lazio region, priests, lay people, men and women religious, as well as many friends who knew Chiara and the charism of unity of the Focolare.

The last 3 of the 75 boxes are sealed

In front of the altar stood a table on which were 75 boxes containing all the documentation that will be delivered to the Congregation for the Causes of Saints at the Holy See, where all the documents will be further studied and evaluated.

The ceremony was presided over by Rt Revd. Raffaello Martinelli, Bishop of Frascati, who summed up the work done collecting testimonies and material over these last few years saying, “The Holy See and the diocesan process must highlight the heroic nature of the person’s virtues, not simply their goodness, but their heroism. This is what I asked for from the beginning, also in the testimonies. We must demonstrate how Chiara lived the heroism of Christian virtues, that is, the theological virtues (faith, hope and charity), the cardinal virtues (prudence, justice, fortitude, temperance), and a whole series of virtues derived from those”.

In his report, the Episcopal Delegate Msgr. Angelo Amati noted that 166 witnesses were also heard during various journeys, such as those to the Dioceses of Rome, Albano and Fiesole (Italy), Lausanne-Geneva-Fribourg (Switzerland), Augsburg-Ottmaring and Bamberg- Nuremberg (Germany), Westminster (England), Ghent and Brussels (Belgium) and two letters rogatory: in Bangkok (Thailand) and Ljubljana (Slovenia). “Bishop Amati emphasised that the investigation concerned Chiara’s life, virtues, charism and specific spirituality, together with the theological themes presented such as: unity, Jesus forsaken and Jesus in the midst; on the foundation of the Work of Mary (Focolare Movement) and inter-church and interfaith contacts. A total of 35,057 pages have been collected, in 102 volumes “which contain various types of material (testimonies, letters, published and unpublished documents, writings, diaries, etc…).

There followed the declaration of the Promoter of Justice, the Revd. Joselito Loteria who, together with the Notary, Patrizia Sabatini and the Episcopal delegate, forms the diocesan tribunal established for the Cause of Chiara Lubich. Then Bishop Martinelli read the decree of closure of the diocesan phase and named as “Bearer” Dr Daniel Tamborini, who will have the task of delivering the documentation to the Holy See.

Then followed the oaths taken by the Bearer, Bishop Martinelli and all the members of the diocesan and postulation tribunal – the Postulator Rev. Silvestre Marques, the Vice-Postulators, Dr Giuseppina Manici and Dr Waldery Hilgeman and the signing of the closing session report.

The most significant moment was the closure and sealing of the last 3 of the 75 boxes containing the 35,000 pages.

“Our only desire now is to offer the Church, through this extensive documentation, the gift that Chiara was for us and for so many people,” said Maria Voce, President of the Focolare Movement, in her address in the Cathedral. In responding to the charism that God gave her, consistently, day after day, journeying on and tending towards the fullness of Christian life and the perfection of charity, Chiara did her utmost so that this path of Gospel life to be travelled by many, in an ever renewed determination to help those she met to put God first and “become saints together”. Her gaze and her heart, as has now been shown, were moved by a universal love that was able to embrace all people beyond all differences, always striving to fulfil the testament of Jesus: Ut omnes unum sint.  It is a cause of joy for all of us to know that now the Church will study and evaluate the life and virtues of the Servant of God, our beloved Chiara.

The diocesan process
The diocesan phase of the Cause of Canonisation and Beatification of Chiara Lubich began on December 7th 2013, just over five years after her death on March 14th 2008. On that occasion the petition to start the Cause was officially signed at Castel Gandolfo. The first testimonies to be heard were the eyewitnesses who knew her from the earliest times of the foundation of the Focolare Movement.

Subsequently, Bishop Raffaello Martinelli consulted the Bishops’ Conference of Lazio on the advisability of starting the Cause, and obtained a positive opinion. The Bishop then established a Commission of three experts in historical and archival matters who had the task of collecting all unpublished material concerning Chiara. Bishop Martinelli then appointed three theologians who examined the published writings. On 29th June 2014, the Holy See granted its Nulla Osta to the official opening of the Cause.

On 27 January 2015, the opening ceremony of the diocesan phase took place in Frascati Cathedral, which ended on 10th November 2019. 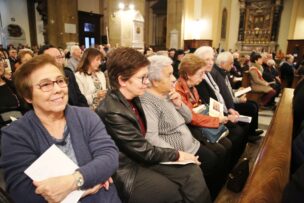 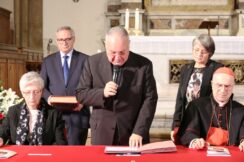 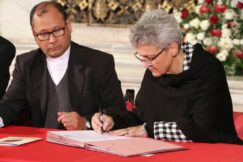