An exceptional wave of monsoon rains, five times greater than average, has caused one of the most disastrous floods in Pakistan in recent decades. A real catastrophe but one which, despite the enormous difficulties, has not dampened the desire of many people on the ground to take concrete action for their neighbour. A fund-raising campaign has also been launched by the Focolare Movement’s Emergency Coordination Team.

What Pakistan is currently experiencing is a real humanitarian and health emergency. The monsoon rains which began as early as mid-June 2022 and are also caused by climate change have brought a third of the country to its knees.  Some 33 million people, 15% of the entire population, have been displaced, more than 1,500 people have died and more than 700,000 homes destroyed. The threat of diseases such as typhoid, cholera and dengue fever grows day by day, and the needs are becoming increasingly urgent.

The megalopolis of Karachi, one of the places where the Focolare Movement has been present for some time, has not been hit as hard as other centres such as the provinces of Sindh, southern Punjab and Balucistan which even under normal conditions are already difficult to reach. However, “the displaced people are also coming here and we are mobilising to organise help in the reception camps,” said some members of the Focolare. In addition, many Focolare members of various ages and vocations are doing all they can to respond as a community to the most pressing needs, with some people even opening the doors of their homes, if necessary, as did Abid, a young father of a family, who took in sixteen Muslims who had lost everything on the first floor of his house.

The largest city affected by the flood is Hyderabad. Matthew, a Gen, one of the young people of the local Focolare Movement, wrote: “The city centre is now safe, but the neighbourhoods near the Indus river are still in danger and some parts have been evacuated. The next two weeks will be very difficult.” 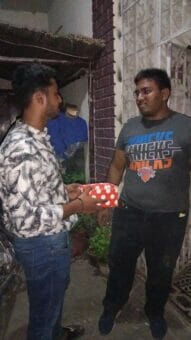 In these days, fear is mixed with a lucid awareness which is generating an inner, instinctive force that looks to the other and, with renewed courage, mobilises and networks.

“As Youth for a United World a few months ago we set up a group called ‘The spirit of giving’.  We are Catholics and Anglicans from the Anglican Church of Pakistan,” continued Mathew’s brother, Hanan. “We met together to make a plan, to work out what we could do to help and how. You could think that we can’t do much or that it’s too little, but we said to one another everyone can give something, we need to move hearts”.

And so it was that by knocking on all the doors in their neighbourhood and going into shops, these young people collected about 5000 rupees while another 2000 rupees arrived providentially in response to a flyer shared on social media. A desire to donate which from an experience of dialogue turned into service and action.

Among the many people in need, we cannot forget that one of the groups most at risk in these parts are the nomadic Hindu communities: “Our families’ tents were on a plain. With the floods  people sought refuge on a raised part of the land that is now surrounded by water.  Now it is as if they are on an island which they can’t leave,” recounted some young people belonging to these communities.

To rally around those affected and initiate targeted relief and support initiatives, especially there where resources are scarce, is more than just a wish.  It is a real priority for everyone.

In response to all this suffering in Karachi, in a rather poor neighbourhood on the outskirts of the city, a small group of Gen immediately stepped into action: “We set up a collection point where lots of people passed by.  Some brought food, water or clothes.  Some left money in a box placed at the entrance,” says Rizwan. “I noticed there weren’t many clothes for the children,” says Soiana, “so I started sewing for them using fabric I had left over from my work”.

To contribute to the Focolare Movement Emergency Coordination Team’s fundraising campaign for Pakistan you can donate to: