Maria Voce at the United Nations 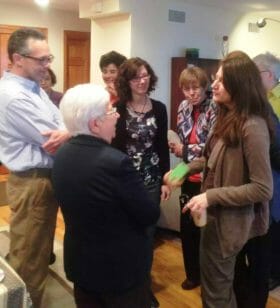 Today marks the beginning of the debate of the United Nations: “Promoting Tolerance and Reconciliation: Fostering peaceful, Inclusive Societies and Countering Violent Extremism”. Among the religious leaders invited to give their contribution is Maria Voce, President of the Focolare Movement. We asked her three questions before she entered the headquarters of the UN.

How do you feel before participating in this high level debate with representatives of 193 nations?

«I am quite at peace. What is often missing in these organizations is precisely the witness of what is already happening to bring about peace. My impression is that people often feel isolated and they need to be aware that someone else is out there with them, working for the same aims as they are. With such a great ideal as the one Chiara Lubich has given us, we do not work only for reconciliation or only for social justice but these are steps on the way towards unity».

«Certainly religions are not supporters of war, none of them. The word religion means bond, it’s a bond between people, how can a religion make war? War is born in the hearts of people and people, whatever religion they belong to can be good or wicked. Instead religion is often exploited under the pretext of justifying a motivation that is anything but religious and is in fact inhuman, the desire for power, overthrowing the weak, selling one’s own merchandise including arms. The root of war certainly doesn’t lie in religion but in other motivations which are basically always egoistic».

When we look at today’s conflicts, for example in the Middle East or in Nigeria, are you still optimistic that peace is possible?

«I cannot help being an optimist because Jesus is peace. And since we follow Jesus we have to believe that peace is possible. It is true that Jesus said ‘I have come to bring the sword’ which means we have to take a stand too. I think that religions can help to reawaken the conscience of humanity: peace isn’t just one good among many but without peace all the other goods are useless. We can work for peace if we do it all together, both the rich and the poor, those who have power and those who do not, people who are religious as well as those who do not identify themselves with any religion. We have to commit ourselves to building these relationships of peace in the whole human family where we are all equal and therefore we should all witness to this equality».

The initiative for this high level debate at the United Nations in New York came from the President of the General Assembly, Sam Kutesa, the Secretary General Ban Ki Moon and the High Representative of the Alliance of Civilizations Nassir Abdulaziz Al-Nasser. Today’s topic is Strategies for fostering inclusive societies. Tomorrow, leaders representing various religions will be invited to give their witness to the role played by religions in building bridges of tolerance and reconciliation.

You can follow parts of the program on live streaming of the United Nations’s TV at http://webtv.un.org/live/