The Opening Of the Holy Doors: an interview with Maria Voce 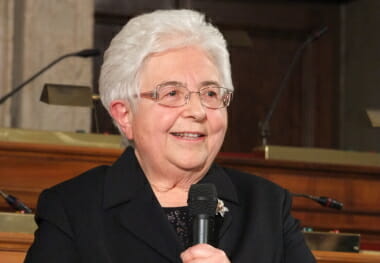 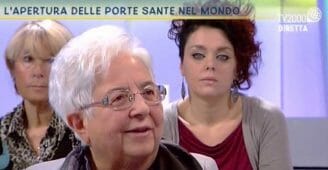 “Bel tempo si spera”, [Hoping for good times] is a programme broadcast by the Catholic Television Company TV2000. The programme on 14th December focused on subjects concerning the Jubilee, taking the viewers on a journey to several Cathedrals in the world, on the day after the opening of their Holy Doors. Maria Voce was in the studio, at the invitation of the presenter Lucia Ascione.

Between one stage and another of this symbolic tour a dialogue took place on various subjects, starting with the meaning of the Jubilee. Maria Voce said, “The Year of Mercy gives us new courage to believe that God is Love. Now, when it seems that everything has become relative, we need to go back to what really matters, to believe in Love”. Later on, she added: “Unfortunately, modern culture speaks of anger, revenge, rights that have been trampled on, things that lead to sadness and despondency. We want to bring trust, forgiveness and mutual love. We want to look at the world as one family, the family of God’s children. And God is mercy, God is love.” “I like to recall – she went on – that the Pope did not open “the” Holy Door” but many holy doors. Pope Francis has said even the door of a prison cell can be a Holy Door. The door is a sign of the merciful love of the Father who is waiting for us all to come home, no-one excluded.”

Lucia Ascione referred to Pope Francis’ words at the Angelus the previous day concerning the Focolare’s dialogue with Muslims.

Maria Voce affirmed, “This harmonious encounter between people of different faiths that we experience did not happen yesterday, but has been built up day by day, over the years and in many places, through friendships; respecting difference.”

Ascione insisted: “If it is so simple for you, why is it so hard for the world?”
Maria Voce: “The Pope has said that unfortunately there is much self-interest. Instead we need to learn how to go beyond ourselves and be ready to welcome others, even if they are different. It is a love that we learn by loving, going towards others. Certainly, differences can make us fearful, that is true for everyone. It is a fear that can only be overcome with love. Taking up arms is of no use.”

The presenter asked “You went to the United Nations and spoke there. What did you say to them?
“I said that we need to convert ourselves, but not superficially. I said we must not see dialogue as one of many ways but as the only real way forward. It is difficult to accept this viewpoint because the “scandal of the cross” has not been understood. Mercy makes us do the part that the other should do, as Jesus did who died for each one of us.”

Maria Voce explained “It is the experience that we have on a daily basis with those who knock on our doors. Recently 170 unaccompanied minors stayed in our little town in Holland and were made welcome”. Recalling the words of the press release that Maria Voce had issued after the Paris attacks, Ms Ascione asked: “What did you mean when you said we should ask ourselves whether everything that could have been done to avoid such violent reactions had been done?”

“Very often we are affected by things that happen nearby, forgetting those that happen in other places where the horror of war is lived every day. We have communities in those places and we know that it is still possible to build something positive. We have doctors who don’t check to see whether a wounded person is a Christian or a Muslim; people who make their wells available to others when water is scarce, regardless of the religion they practice. Maybe we don’t know how to ask ourselves the right questions. That is why we questioned ourselves first of all. Perhaps we did not follow through with these things in the past. Being able to make an examination of conscience can open us up to hope. Seeing those who suffer, who are poor, we must not be afraid to open our hearts. We must not be afraid to empty our pockets and our wallets, to live simply and with respect for creation, seeing other people as brothers and sisters, part of the same family.”