Madaba, At the Start of the New Host Spot Project 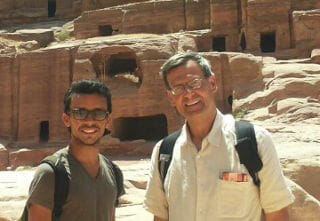 “We haven’t come to teach, but to learn, not to talk, but to listen. Then, when we return to our own countries we’d like to tell many others what we’ve seen and experienced. We’re here from several European countries, from the Middle East, from New Zealand, the United States and Argentina. We’ve already begun among ourselves to enter the other’s culture and to sincerely understand other points of view,” explains Marco Desalvo, president of New Humanity at the conclusion of a visit to Madaba, Jordan. He visited the country on August 7-19 with 55 young people from several European and Middle Eastern countries, to begin the first phase of the Host Spot Project at a welcome centre for Syrian and Iraqi refugees.

This place has sites that are significant for the three great monotheistic religions,” Desalvo recounts. “Visiting the Jordan River, the place where Jesus was baptized, I was struck when I learned that it’s the lowest place on earth. It seemed to indicate the kind of attitude we should have in front of each person we would meet. We began each day with a motto, our ‘daily input’. The first day was: Try to understand others by serving them, aware that we have much to learn. Then came the meetings with the Syrian and Iraqi refugees: stories of great suffering, families, children…. Sharing their pain united us with them more and with one another. I’ll never forget Saheed and his story: Two years back, on August 6, the whole family, including his mother who was unable to walk, had to leave their house, the country, leaving everything behind. I could only imagine how they must have suffered and lived in those months, the hope to return, and now the infinite expectation for that telephone call that would let them know whether or not they would be welcomed in a new country. 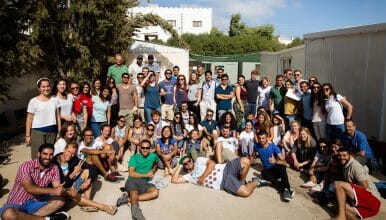 The president of New Humanity admits being very struck by the volunteers from Caritas Jordan: “Irreplaceable, precious, discreet, source of hope, of life of concrete love, medicine for everyone they meet.” Without them thousands of refugees would not have a roof over their heads and the means to survive – to find hope. Working with them we touched with our own hands the deepest meaning of the word ‘Caritas’: concrete love. Two weeks ago I was in Poland at the World Youth Day, and the message of Pope Francis to the two million young people is still fresh in my mind: ‘Don’t retire at the age of 25, [….] don’t be couch potatoes […] aim high. […] They might be able to judge you dreamers because you believe in a new humanity that does not accept hatred among peoples, that does not see borders between countries as barriers, and that preserves its own traditions without egoism and resentment. Don’t be discouraged! With your smiles and your open arms you preach hope and are a blessing for the human family.” Here in Jordan I’ve met young people who put these words in practice. Their work is certainly a small drop in front of the problems we’re facing. But with young people like them, the world will change. These days have turned us into ambassadors of the refugees, of their suffering, of a world of Peace.” 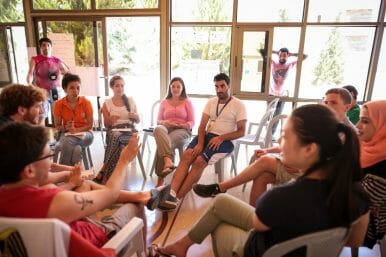 The Host Spot Project is promoted by New Humanity and other associations from nine countries, and is co-financed by the Erasmus+ programme. The objective: to spread a culture of human rights. These are young people from different backgrounds, ready to acquire the knowledge and skills to defend the right of freedom of expression and to be engaged in producing documentaries that tell the life stories of the refugees. After Jordan, the project is planning on a March 2017 training course in Germany to develop the technical skills needed to produce social documentaries. There will be the meeting with refugees in German refugee camps, and different forms of welcome will be compared.

See also: Volunteerism in the refugee camps of Jordan