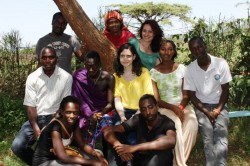 Man (Ivory Coast), the “City of 18 mountains” has some 100 thousand inhabitants from several different ethnic groups. Most of them are dedicated to farming and are reduced to extreme material and human poverty that has worsened as a result of the war that spread across the country in 2002. This is the social context in which the Focolare Movementâ€™s Mariapolis Victoria is situated in the northeast of Africa. There were over 3000 refugees during the hot moments of the war; more than 100,000 patients showed up at its Community Medical Centre. The Movement also has a child nutrition programme that operates in the city and surrounding villages.

Some members of the Mariapolis share how Christmas was also spent in function of the most marginalised and lonely, especially those in most need of love: There was a day of feasting with the Christian and Muslim children from the surrounding area at the local parish. There was singing, dancing, performances and lunch for everyone! Each of the some 1000 children plate and cup in hand stood in a long line waiting to receive lunch. It was nice to be able to look into their eyes, wish them bon appétit and thank them for waiting so patiently!

One group of young people from the Movement decided to attend the festivities in Blolequin village, 175 km from Man, with some orphan children and the Consolata Missionary Sisters who care for them. 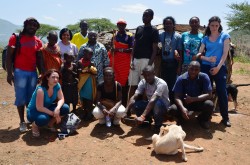 In the village of Glole, 30 km from Man, a group from the Focolare community became involved in preparing a Christmas feast. People arrived from 12 villages that have been assisted for many years by the Nutrition Centre at the Mariapolis. Local chiefs and village notables also attended, as well as leaders from several Churches. In the atmosphere of reciprocity that was created, one of the village chiefs stated: When I present my work plan to my collaborators, if they don’t agree with it, I feel that I will no longer be able to bring it ahead on my own. Instead I will try to embrace what we can agree on together.

An important contribution to the evening programme was a well-known text written by Chiara Lubich: One City is Not Enough. In it Chiara encourages us to seek out the poorest, the most abandoned, the orphans, the prisoners, the ones on the margins of life, and give to them: a smile, a friendly word, time, material assistance… concrete love that is able to transform a city and even more. This was followed by an exchange of testimonials, mostly concerning the activities in underway for suffering children and orphans.