You are in: Home > Spirituality > Days of Mercy in Man 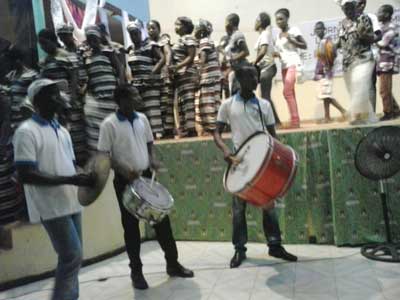 “A blaze never starts from a large fire, but from a small flame. Today we’re here to light this flame.” These words from Bishop Gaspard Béby Gnéba on the Day of Mercy and Fraternity Among the Peoples, tell what the living experience was like,” write Vitoria Fransiscati and Bertin Lubundi from the permanent Mariapolis in Man, Mariapolis Victoria, at the conclusión of the Day of Mercy organized by the Focolare upon the urging of the Bishop of Man, on June 24-26.

The period of preparation allowed for a series of different kinds of encounters in a diocese where only  6% of the members are baptized. So, there are many opportunities for dialogue! Fifteen traditional leaders and 18 imams from 33 of the city’s quarters attended  the day on Fraternity in Politics on June 25th. Two of the topics discused were conflict resolution and thoughts and experiences on the “practice of authority” which led to a lively debate.

One of the most interesting testimonies was that of Imam Rev. Koné from the most important mosque in Man. He spoke of his relationship with the Catholic bishop: “It was he who first approached me; he first loved me. We came up with a plan of action, and now is the time to put the plan into practice. We need to help one another to respect and accept our differences and to know one another’s faith.”

The event opened on the evening of June 24th with a concert called: “Many People, One Family” which included performances by several different ethnic artisitic groups.

The Days of Mercy woke up the city of Man with a Peace March: Christians and Muslims marched together on a 7km walk from the centre of the city to the Focolare’s permanent Mariapolis. Then, there was a series of visits and taking gifts to 32 needy families from practically all the quarters in Man. The protagonists were the bishop with his delegation and the families. “They were emotional and joyful moments for the people we visited, also the fact of seeing the bishop himself bringing gifts without expecting anything in return, as unfortunately happens often with some politicians who want to buy support.”

This was a start at fulfilling a dream, the Bishop said: “It was a training for people who hold responsiblities in society, adminstrators and those who work in interreligious dialogue, so  they might continue to live mercy in civil society.”