You are in: Home > For a ‘global civilisation of alliance’ 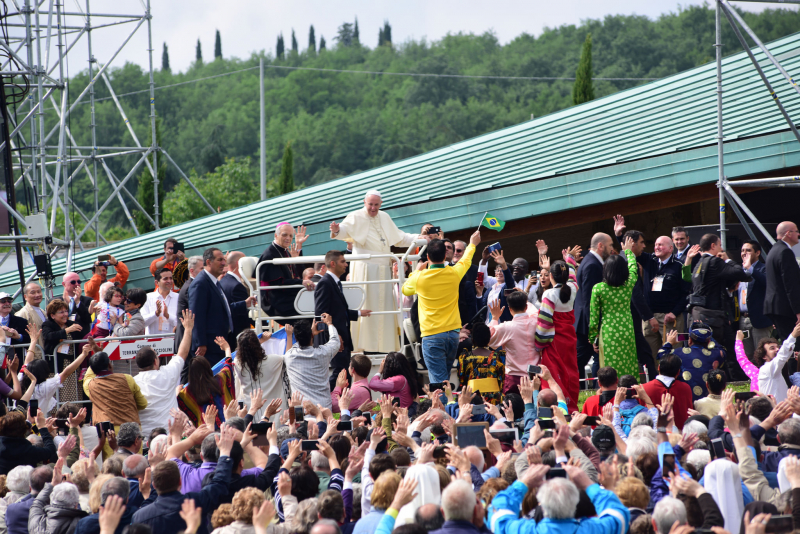 “Build a common culture of encounter.” This is the challenge Pope Francis launched this morning from the international town of Loppiano (Florence, Italy) not only to the 7,000 people gathered in front of the Church of Maria Theotóko, but to the whole world.

In referring to the “pressing and often dramatic needs that call out to us from everywhere and which cannot leave us indifferent” – the Holy Father underlinedthat the mere “encounter between people, cultures and peoples” no longer suffices. We need men and women who can “trace new paths to pursue together” to give rise to “a global civilisation of alliance.”

Pope Francis arrived punctually at 10 a.m. in the Focolare town and was welcomed by Maria Voce, President of the Movement, Jesús Morán, Co-President and the bishop of Fiesole, Bishop Mario Meini. After a brief prayer in the church, he met the 850 inhabitants of Loppiano coming from 65 countries and other thousands from all of Italy, most of whom are members of the Focolare Movement. . 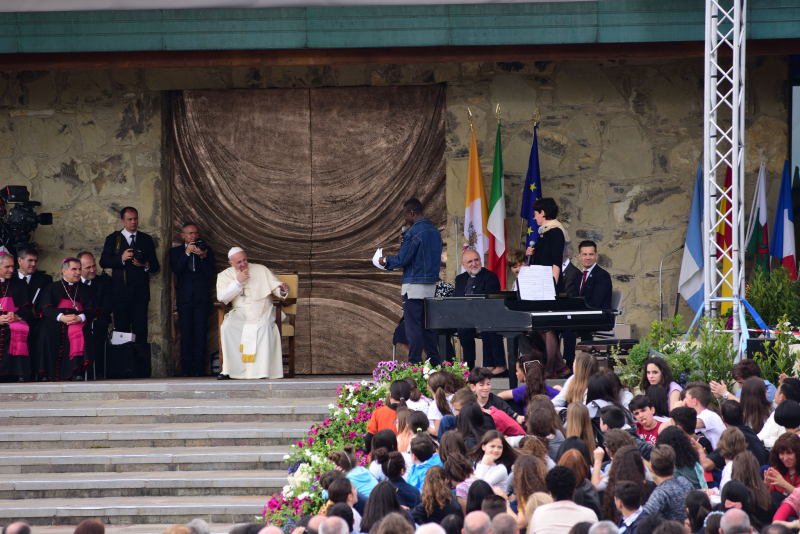 It is the first time a pontiff has ever visited this “tiny town” – which, as Maria Voce defined in her welcome speech – wants to be a “workshop of human coexistence, a piece of united world and testimonial of how society could be if based on the reciprocal love of the Gospel.” An open and straight-forward dialogue ensued, interrupted by some questions posed by a group of Loppiano citizens. The questions focused, from various perspectives, on the theme of the challenges of Christians in face of modernity. The Holy Father encouraged all not to “hide behind a quiet-life, respectability or even subtle hypocrisy, (…) but live as disciples, sincere and brave in charity and truth” and to face the hardships “with tenacity, serenity, positive energy… and also a pinch of humour.”

And upon referring to the mission of an original project like Loppiano in the current social context, the Pope invited all to raise their gaze with him “to look with trustful fidelity and generous creativity to the future which has already begun today.”

After imparting his blessing to all present, 37 Loppiano citizens of diverse origins, religions, age and walks of life greeted Pope Francis personally.

In response to the Holy Father’s words, the Focolare Co-President, Jesús Morán gave him a symbolic gift: a “pact” signed by all the inhabitants, with the commitment to live in such a way as to make Loppiano become more and more, a place of brotherhood and reciprocity.

When invited to sign the “Loppiano Pact” the Holy Father did so with joy, amid the applause of all present.