You are in: Home > News > News from the Focolare in Ukraine

A 29-hour drive out of Kyiv to reach Mukachevo, a town in the west of Ukraine. Heavy traffic on the roads, long queues at cash machines and petrol stations, tanks and people along the way asking for a lift. Donatella Rafanelli is a focolarina, from Pistoia in Italy, who has lived in a Focolare community in Kyiv since 2019. She spoke to “SIR” about that journey along the ‘route’ of internally displaced persons.

Donatella told us, “We were in Kyiv when we received a phone call on Thursday morning advising us to pack quickly because there was shooting 70 kilometres from the capital. We didn’t know what to do because for all of us it was the first time that we were in that kind of situation. We went to look for the closest shelter to our house and were directed to an underground carpark. We went home and rang the Italian embassy on an emergency number. They told us to stay home and go to the shelter only if there was an alarm. Everything seemed normal.

People had been talking about the possibility of an attack on Kyiv for days, but when it happened, the first thing we did was look each other in the eyes. We said, here we go, we’re at war. And we prayed. We asked Jesus to give us strength and to give us peace. From then on, it was all a race against time. We put a few things together in a small bag. We took very little, the bare essentials and personal documents. We tried to get train tickets so we could go to the west, but they were sold out. The airport was closed. So we decided to take the car. The roads out of Kyiv were blocked. There were very long queues at the bank to get money and at the supermarkets. It took a long time just to get out of the city. We stopped twice for petrol. At the first petrol station we queued for an hour. And while we were there, waiting, we heard the shots. It was an emotional moment. We stood still, in silence. When we set off again, you could see tanks and people hitchhiking for a lift. Our phones were constantly receiving and sending messages and calls: from those who had left, from who had decided to stay. We were sharing news and putting the people who were trying to leave in contact with the Focolare communities in Slovakia and Poland, who had offered a welcome. Only as we were travelling, did we realize what had happened to us. We weren’t in the car to go to an appointment or a trip. We were leaving a city, our home. We would never have wanted to leave. But we realized it was impossible to stay.”

In Mukachevo, Donatella and her companions were welcomed by a Parish Priest and by the community of the Focolare there. “We are still in Ukraine; this is very important to us. We didn’t run away. We want to continue living in this country. We’ve been offered lots of places to go. The fact that we left Kyiv is just because it’s dangerous right now. There was no point in staying under the bombing. But now our dream is to go back there.”

She continued, “War? It’s madness, no one has the right to take someone else’s life or rob them of the chance to live a normal life. People here have made a lot of sacrifices to buy a house, save money. And now with the war, their plans for the future are jeopardized, their dreams are shattered. We are praying that this madness will end as soon as possible. We are following the news of the talks between the delegations and of the efforts being made at the level of international diplomacy. I think the only thing that can help us is a miracle. It really helps us to hear all the news from people who pray for us and who demonstrate in the streets for peace. We need a miracle.” 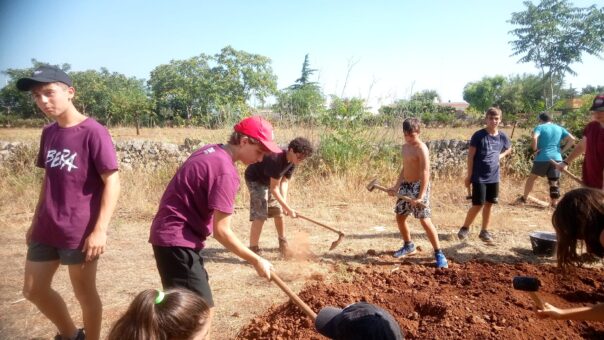 ”Stoc do”, “I’m here”, in free land
Since 2017, in lands confiscated from the mafia in San Vito dei Normanni (Puglia...
Chiara Lubich: Keep only what you need
Chiara Lubich spoke to young people in very clear terms. This is what happened a...
Tourism in tune with ecology
The Encyclical, “Laudato Sì” helps us to look for ways to relax and rest in resp...
[more]