You are in: Home > Signs of unity in Birmingham (UK)

Known for centuries as the “city of a thousand trades” and “workshop of the world”, Birmingham is the second most populated city in the United Kingdom. It currently has a youthful appearance with 25% of its inhabitants under 25 and is markedly multicultural – largely due to the movement in and out of Birmingham of workers from all over the country and the world who have walked and built its streets and the country’s economy since the Industrial Revolution.

It was here that the meeting of the General Secretaries of the European Bishops’ Conferences (CCEE) took place from 1 to 4 July on the contribution of Christianity to a re-awakening of consciousness that can truly be described as European. Maria Voce was invited to give her testimony on the importance of charisms within the Church, with a report entitled “Petrine profile and Marian profile: together for a new Pentecost”.

Despite it being a lightnin 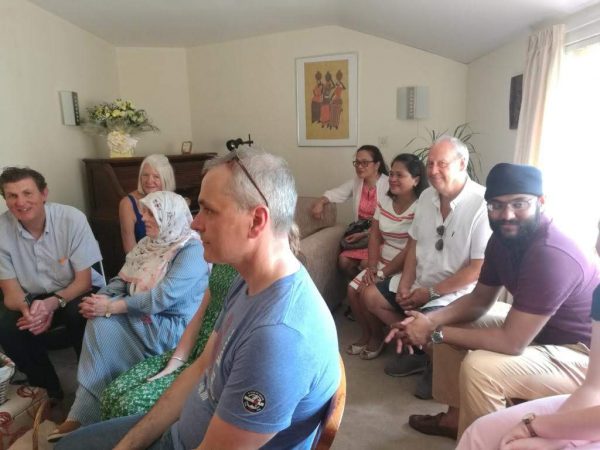 g visit, the president of the Focolare Movement still managed to get to know the small community of the Movement that also reflects the variety of nationalities and cultures present in the city. There were people from Burundi, Uganda, India, Malaysia and the Philippines alongside those born in Great Britain. They were Sikhs, Muslims, Christians from the Catholic and Anglican Churches as well as those of non-religious convictions.

In a simple and spontaneous dialogue, Maria Voce showed them a way: “Universal fraternity is our goal and each one of us has to follow our own path; and we do so when we love because love makes us see what others need. This city of a thousand trades can become the city of a thousand faces, a thousand flavours and a thousand encounters with the many people you meet. I hope everyone you meet will really be touched by the love you have for everyone.”

She also visited the Guru Nanak Nishkam Sewa Jatha Gurdwara, the centre for one of the city’s Sikh

communities. The President, Bhai Sahib Bhai Mohinder Singh, warmly welcomed her together with a group of children from two secondary schools in the city, the Sikh Nishkam High School and Catholic Saint Paul’s School. The Catholic Archbishop of Birmingham, Bernard Longley, and a representative of the Anglican Bishop David Urquhart, were also present.
For years the two communities – the Sikh and the Focolare – have been working side by side for peace, to bear witness to the fact that there is much more that unites us than divides us. The visit to Birmingham of the international group Gen Verde last November was an example of this. Many young people of different faiths participated in the workshops organized by the band and performed in the final show.

During the visit to the Gurdwara, Maria Voce was given the “Peace Charter for Forgiveness and Reconciliation“, signed by several leaders and international religious organizations which seeks to “foster healing, harmony, justice and sustainable peace in our world”, as the preamble itself states.

“Division is not God’s plan; God’s plan is unity and we believe in this” – Maria Voce concluded – “what binds us are not only the efforts of collaboration for the common good. We are bound by a gift from God: the dream of unity for the whole human family”. She then stressed the centrality of forgiveness in a way of life and relationships centred on dialogue and mutual acceptance: “Only by taking these small steps will we be able to overcome even the conflicts that every day try to divide us. Bhai Sahib Bhai Mohinder Singh then gave the President of the Focolare a passage from the Sacred Sikh Scriptures that speaks of the love and union between God and creation, with the wish to continue to walk together for peace and harmony amongst all people. 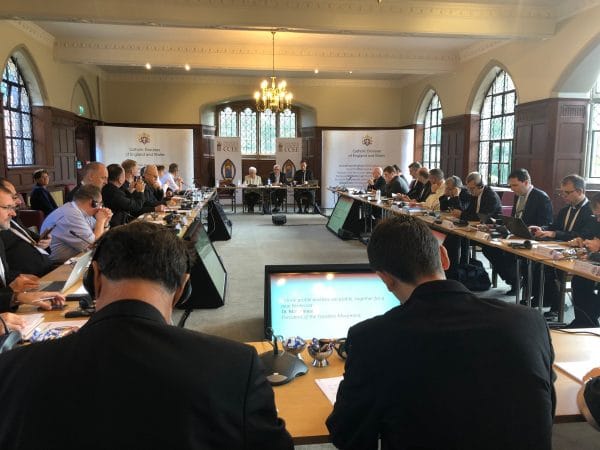 On July 2, the President of the Focolare gave her speech at the meeting of the General Secretaries of the European Bishops’ Conferences; Jesús Moran, Co-President, was also present and participated in one of the dialogue sessions.
Maria Voce stressed the “co-essentiality between hierarchical and charismatic gifts in the Church”. For the President of the Focolare, the different realities “arising from a charism need to live strongly grafted onto the whole ecclesial structure of which they are a part and cultivate a fruitful exchange with all the other realities.”

“It is not a question of everyone doing the same thing together, staying ‘at home’, but of setting out in the most varied directions, driven by a shared eagerness to reach the ends of the earth”. Finally, she indicated the Marian profile of the Church as a dimension that “teaches how to give life to pastoral care which is authentically generative.

The Trinity as a model for relationships between generations
Maria Voce was one of the speakers at the International Conference of pastoral c...

#EoF: Side Event, Perugia 27-29 March 2020
Promoted by the Economy of Communion, the Perugia side-event is organised for al...

Witnessing the Australia bushfires
Kevin and Trish Bourke live in Myrtleford, a small rural town of 3,500 in the st...