You are in: Home > The Christmas Card 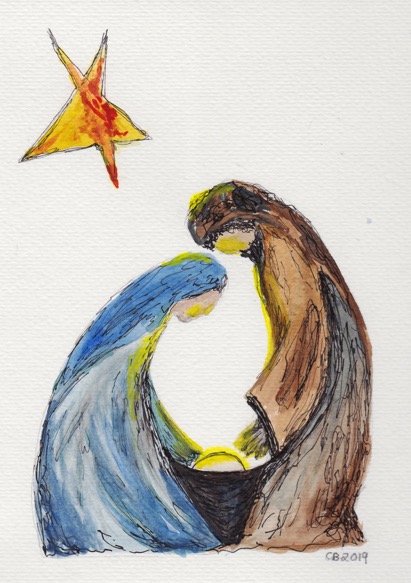 Of course, my days gradually became so packed that one by one, these activities had to drop and I fell into the trap of what I was advised never to say to anyone still working ‘I don’t know how I had time to go to work!’

The last thing to go was the watercolour painting class and though I have rarely been during this last year, I still receive the emails from Ian who holds the class in the bar of the local golf club. At the end of October he e-mailed us that the next day, members would finish painting Christmas cards which he would be printing to sell for the Lady Captain’s charity at the golf club’s craft fair. He attached to this e-mail the many cards everyone had already made. I looked at them all – so very beautifully painted – some winter scenes, some robins on delicately painted twigs, some jolly Father Christmases… But where was the real meaning of Christmas?

Not having painted for nearly a year and being really rusty, I still felt I had to go against what I saw as the secularisation of Christmas and try my hand at depicting the nativity scene. The result was very basic and not at all at the level of the other painters. I had great difficulty with Joseph’s hand and by the end it seemed he was wearing a gardening glove as it hovered over a lump in a crib that was supposed to be baby Jesus. Ian tried to help me by adding dots for eyes and a smiling mouth. He had done this in pencil saying I should feel free to rub it out if I didn’t like it. As soon as his back was turned I grabbed my rubber in horror as it looked to me more like Humpty Dumpty peeping over the wall with a grin. Anyway, at least I had done my part to have a little religious input into all the many secular Christmas cards and crafts that would be on display to the public. Ian had invited us also to put in an order of our own if we wanted to have some Christmas cards for ourselves.

As he was collecting up all our paintings at the end of the class, he said that he had rethought and instead of immediately printing the extra ones we had ordered, we could instead take the unsold ones left over from the fair and then he would print any more that we wanted. Although he has always been encouraging to me, I could tell that he was pretty sure all mine would be left over, not being at all professional looking like the others. The fair was due to be held the following week and he asked us all to come and support it.

I had a very full day that Sunday and only had a few minutes to show my support at all the stalls, collect my unsold cards and return.  As soon as I walked in Ian called me over: ‘Cathy, all your cards were immediately sold!’

I was so happy that people still want the meaning of Christmas in their lives, and that I had overcome my pride to produce something that had obviously no artistic value but a value of a different kind.

#EoF: Side Event, Perugia 27-29 March 2020
Promoted by the Economy of Communion, the Perugia side-event is organised for al...

Witnessing the Australia bushfires
Kevin and Trish Bourke live in Myrtleford, a small rural town of 3,500 in the st...

Trent, Italy: the President of the Italian Republic at Chiara’s centenary event
President Mattarella took part in the “Trent meets Chiara” event at the Mariapol...