You are in: Home > Jesús Morán re-elected as co-president of the Focolare Movement

The election of the co-president was also welcomed by the Focolare Assembly with worldwide applause and today, the Dicastery for Laity, Family and Life confirmed his appointment on behalf of the Roman Catholic Church.

Jesús Morán is 64 years old and was born in Navalperales de Pinares, Avila (Spain). He first came across the Gospel message proposed by the Focolare Movement during his university studies, through the witness of some of his fellow students. He graduated in Philosophy from the Autonomous University of Madrid and obtained a Licentiate in Dogmatic Theology from the Pontifical Catholic University of Santiago de Chile and a Doctorate in Theology from the Pontifical Lateran University in Rome. 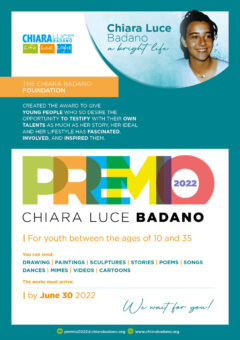 Chiara Luce Badano Prize 2022
A youth competition dedicated to the young girl from Sassello, Italy, beatified ...
Chiara Lubich: those who love, do good
The new commandment of Jesus, love of one's neighbour, is what the Word of Life ...
Winning for the common good
To participate in a film competition and then use the cash prize to help others....
Living the Gospel: “I give you  new commandment, that you love one another” (John 13: 34).
The new commandment calls us to make space within ourselves  for the power of Je...
[more]