You are in: Home > Politics & Law > Unity in Politics: a new moment in UK 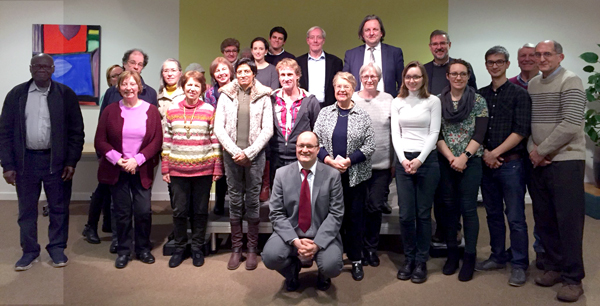 Michal Siewniak has been working in the voluntary sector for the last nine years. He is originally from Poland and lives in Welwyn Garden City with his wife and three children. Michal is a local community activist and a former councillor. Michal writes:

As people from various walks of life arrived there was a great sense of hope for what was about to start. We were gathering to talk about something so very important for the everyday life of every person – but most likely not heard of yet here – ‘The Movement for Unity in Politics’, whose ‘specific aim is to promote fraternity in politics’. No doubt, we do not hear these words used in today’s political arena but is it not a vision, which we can all work towards? Do we all not have a duty to do this? I believe we do.

For many the very word ‘politics’ can bring about a negative reaction as the only politics witnessed perhaps has included name-slanging, lack of civility, untruths at times and even the absolute refusal to work together on major life-threatening issues that affect every man woman and child in the UK. Some of the media have also played a major role in creating massive negativity and division. I felt it was time to ‘throw my hat in the ring and do my part to change this’ and I entered the field of politics. I loved the idea I had heard from Chiara Lubich, founder of the Focolare Movement, on ‘unity in politics’ and to promote ‘political fraternity,’ through which we learn to truly listen to the other person, work together and love the other’s city or nation as our own. Seem like a utopia? Not if we don’t want it to be!

There was agreement at our gathering, that there is a growing need to find new and better ways to provide a new platform for politics where meaningful dialogue is seen as the best ‘formula’ to tackle local, national and global issues which affect us all. The big issues of today in the UK include the concerns about the National Health Service, migration, the refugee crisis and the general polarisation that we see in the political landscape. In fact, it is clear that a new form of politics is most definitely needed in which all people of different political persuasions feel free to express their views, even if different from each other. This needs to be embedded in public life.

We listened to a ground-breaking talk given by Chiara Lubich in Innsbruck in 2001, where she spoke about, ‘The spirit of fraternity in politics, key to the unity of Europe and the world”. Therein she covered the whole spectrum of how politics should be lived out, and spoke about mutual trust, respect, a vision for Europe, Europe’s Christian roots, collaboration and enhancing the economic, cultural and social spheres. The consensus was that it is as relevant for today as it was then where 1,000 mayors present from across Europe heard it.

It was therefore a delight to have other politicians – who believe in this new way to live politics – present to address the group. Roger Casale, a former Labour MP, civic campaigner and the founder of a new group called, ‘New Europeans’ shared how Chiara’s talk resonated with him and spoke about ‘politics being a vocation’. He reflected on his own experiences of working in Westminster; along with meeting Chiara Lubich and the Focolare Movement. He also shared his vision of the proposed ‘political fraternity’, which he supports wholeheartedly and which unites rather than divides.

In addition, Tony Skottowe, a former Liberal Dem Leader for Welwyn-Hatfield spoke about ‘politics of unity’ at the local government level and gave much hope to many present for the future. Tony, a former teacher entered the political field, as he was completely disenchanted with what the politicians of the day were doing particularly in the field of education. He said he believes that unity in politics is the way forward, “because the only other alternative is an increasing polarisation of left and right and that is most likely to lead to the disintegration of UK society.” Later both politicians answered the participants’ questions. One woman said that she had ‘found new hope after today…as I have never heard politics being spoken of like this!’

The attendees agreed that politics is a beautiful vocation! Perhaps not all will stand for Parliament or the local council; and some may feel that they perhaps are not prepared yet, or have the necessary skills, but we agreed that ALL of us can do something. That choice lies with each of us, whether at our local school, church, business or in our neighbourhood. We can be more fully part of our local community in so many ways! Serving our neighbour, and working for the common good, for the betterment of our people and society, should come first.

I felt that this meeting contained something significant for the UK and that politics should become – the ‘love of all loves’ – as Chiara described it. It is a key component for the holy journey of life that we are all on so I ask, why not walk it together and make the road ahead less bumpy albeit it will at times be challenging; however, I am sure we are all up to a challenge as in the courageous British-spirit well known throughout the world!

Our initiatives will not be what I call ‘talking shop’, but they will be events, which will offer many ‘practical incentives’. Currently we hope to hold future meetings in Scotland (November or December), Newcastle (June), London, and Oxford (October).

I would like to end by quoting Igino Giordani, (a co-founder of the Focolare Movement), an Italian politician and eminent writer, who helped start the first ‘Unity in Politics’ group back in the ‘50s in the Italian parliament. He wrote the following note to Chiara in talking about the political world and his personal experience as a politician,

‘We who live at the very core of public life constantly experience that on a purely human level – even at the level of the most noble ethical values – there is no hope of redemption for this narrow-minded world of insincerity, conflicts and power struggles. Unfortunately, we note that even religious values are unable to change the homo politicus [stereotypical behaviour of people in a political setting], who accepts them only to the extent that they prove to be useful, and puts them aside as soon as they get in the way. Individual achievements prove to be insufficient. We need the brilliant light of Wisdom to awaken all humanity’.

Gen Rosso meets the world… in their own home
Their live streaming sessions from Loppiano keep alive the hope that fraternity ...

FOCUS – the world will no longer be the same: what can help to make it better?
Dialogue with Vincenzo Buonomo, Rector of the Pontifical Lateran University; Lui...

Working in Perfect Communion
In these times of the coronavirus, often it is no longer possible for us to visi...

Together we can get through this
How the many children who are members of the Focolare Movement are living this m...